I am looking to find A new way to live my life. It started last year when I decided I am tired of sitting at home with my husband watching tv almost every night. I wanted more out of life.  My daughter and I had already got tickets to see two of our favorite musicians, Blake Shelton, and separate concert Miranda Lambert. After that, I did a few more things on my own.  Like rented a motel room about 40 miles from my house just to have a mini vacation from my husband. A good 5 days by myself in which I spent most of it with my Mom.    This weekend I have a bridal shower for one of my many nieces, but can’t stay for the full time, because then a Garth Brooks concert in which I am taking several people.  Next month, one of my special interest, a quilting show, which I am taking 3 days of vacation for and taking 4 classes. Then the next concert, Luke Bryan.   I am a wife, mother, and grandmother. I work full time.  But I have decided that I want more and am going to live life to its fullest.  Writing has always been something I loved, so I have decided to add it back in my life also. This is just my beginning.

So the last few months haven’t been so great. It started the week before thanksgiving 2020. I’m at work and my Mom calls. Figured bad news, because my brother in law has lung cancer advanced stages, thinking he had passed away, but not him. One of my sisters died unexpectedly. Ended up being a heart attack. The next week, one of my nieces had preeclampsia. Emergency c section and baby delivered 10 weeks early. The next day, a family friend of my husband’s died of COVID-19. Really bad two weeks. (By the way, baby spent 52 days in Nicu and went home 3 weeks before her due date, so great news there). One of our younger operations people at work almost died of COVID-19, is back at work now but major issues. Right after Christmas, which I spent with my parents and several other family members, I was diagnosed with COVID-19, and subsequently my husband. Luckily not my parents. About 2 weeks later, one of my direct reports ended up on FMLA for her Mother. She was out for a few weeks until her mother passed away. Today my mom called me at work to say my brother in law passed away. I will take off of work tomorrow and go with my mom to my sisters house. I am sad today and looking forward to seeing my sister. I saw her in October, but under better circumstances, slightly. Just so sad for everyone at the moment.

It has been two weeks now. Lost one of my sisters two weeks ago. Not an expected death. We knew she had health issues and I was going to reach out to her to talk. My family is a bunch of introverts and we don’t really talk. I had reached out to my oldest sister who is going through her own struggles, but I had not yet reached out to this one. I make quilts and had given my oldest sister hers, plus an extra for the living room. I am working on myths quilt for this sister. It will go to one of her children. I have so many nieces a nephews play husbands and wives to make these for, that I am not sur ewhen I will be done,

I am sad but will overcome it to live my life

I am in love with sewing. I always have been and have had toy machines starting around age 6. I am number 7 of nine children and am the only one who has really seemed to love sewing. After receiving a quilt from my Grandparents when I got married (I say grandparents because my grandmother had already passed away and my grandfather made sure I received the quilt), I decided it was time for me to start making them. I have been on my journey for a number of years now wish I had more time and energy to do so. I am working on retiring and that means paying off my house first, but I plan to keep on quilting. 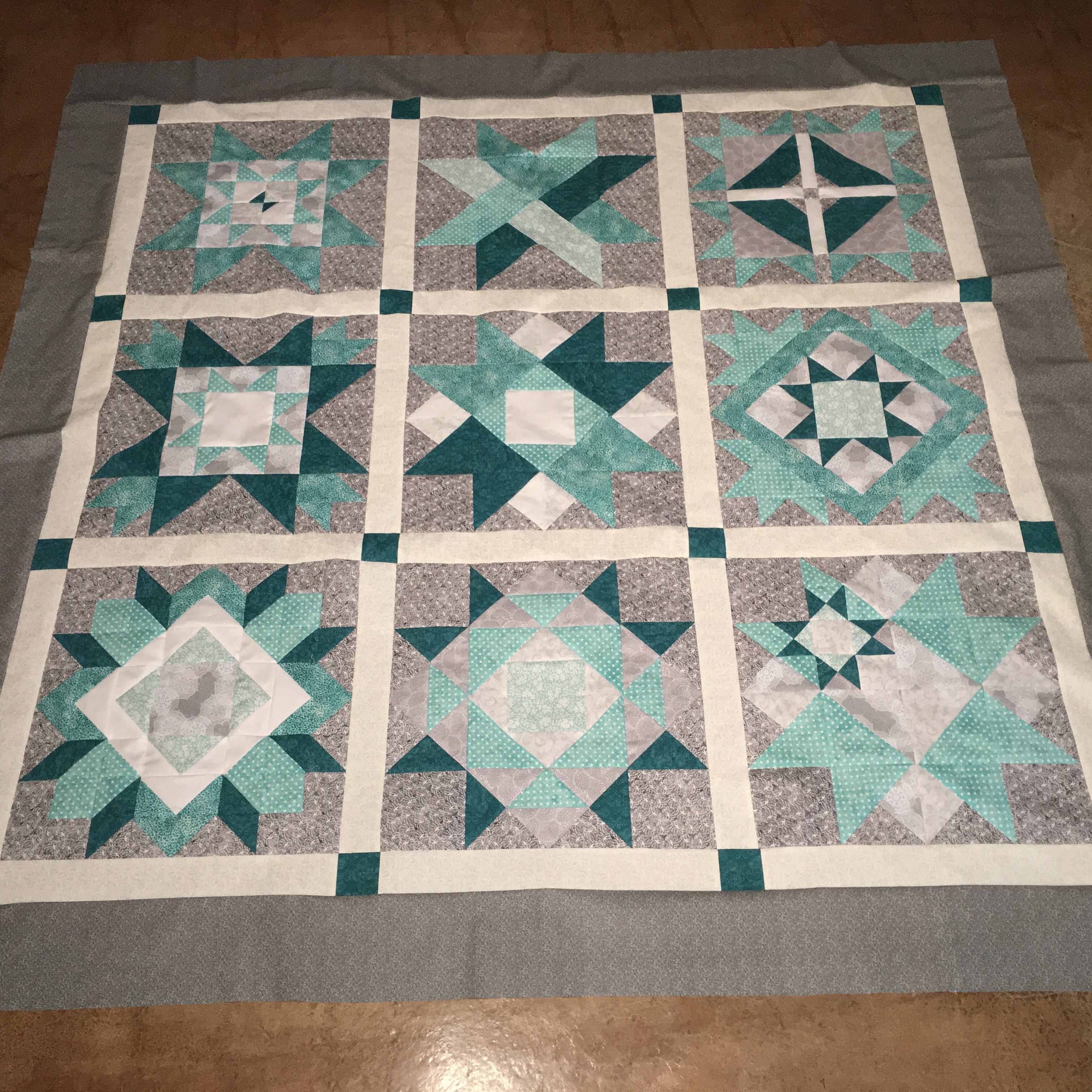 I am showing a few of the quilts I have made. I do all my own quilting on a domestic sewing machine.

I am having a delima. I love sewing. My husband loves fishing. He sees no problem with spending $5k on a 10 year old boat, and after shopping with him for over a year, I agree, boats aren’t cheap. We sold the 20 year old boat for a minimal amount and put that back into savings. I think he has spent at least $5k in equipment for the boat, part from his stash, part from our checking. That is fine with me, because it makes him happy and keeps my parents supplied with good fish. My problem is I am a quilter. He doesn’t see the investment in sewing machines the same way. I don’t really tell him when I buy something new, because he doesn’t understand. I spent $2k last year on an embroidery machine. He wasn’t thrilled,but he accepted that. Last week I did buy a higher dollar sewing machine, with trading in my 2 1/2 year old machine. I am also getting a nice sewing table with it. Of course I do have to tell him, need his truck, but now he will make me feel guilty for the expense, which is my dilemma. Why should I feel guilty when he works less than me, makes half the salary and has 2-3 days a week to do what he wants. Of course I will tell him, but I will have to explain why I needed that machine. I did wind a bobbin on it today and sewed a seam, just to see how well it worked. The bobbin was awesome as I didn’t have to do anything except press a button. It was great. Oh well, guess I will just go have to face up to it so he knows why I took the truck. Hopefully I won’t back into the barn when I park it.

Today, but after drinking a bottle of wine I am very sad. It was really the first nice day I a long time, but a I realized 10 months how much I am really missing my dog, Ginger. We had to put her down last May for health reasons. I really miss going to the park and walking 1-2 miles just to make her happy. She was such a good and loving dog. Myhusband and I agreed no dog for a year. We wanted to go out and do things without worrying about a pet. Unfortunately that didn’t work for us. The first vacation we tried, it flooded every where we wanted to go. The second was a blizzard or ice. I think today started because our daughter and her husband brought their 1st house, though I know it will not be her last. They and their daughter are moving in today. It just brought up so many memories for me that I have been very sad.

Wow! You never know growing up what your friends will be like when you get older.

I grew up as a white person in a predominately black neighborhood. This was in the 1970’s, 1980’s. This was a time of racial tensions and desegregation in schools. Not a fun time.

I graduated High School in 1983. I, along with most of my brothers and sisters got out of the neighborhood that we were raised in to give ourselves and our families a better life. Now, that doesn’t mean that we turned our back on where we came from. Our parents still live in the same house and we all go to visit them, have lots of family functions there. We are not worried that anything will happen. The neighborhood is the same, but has mellowed out.

So it is great that one of my friends from work grew up not too far from me. Her neighborhood was a bit worse than where I grew up. Like I said, my neighborhood seems to have mellowed out some, hers has gotten worse. We both wish the same thing, to win the lottery so that we can move our parents somewhere better. That is the only way we can do that.

I am a 53 year old white woman and she is a 28 year old black woman. I am a Contoller of a company and she is an It (information technology) specialist. We graduated from the same High School 25 years apart. Just learned that yesterday.

The neighborhood she grew up in was far worse than mine. There are constant shootings and killings where she is from. You don’t talk to the police or your whole family can wind up dead. That is how you live until you can get out of that place, if you can. She did. She went to college, online, and made things better for her family.

She is also and artist, a nerd, a geek, a gamer. She decided her 10 year old son was becoming too much of a gamer like her, and needed to learn new skills. She started teaching him how to repair computers. That way, he knows wha t goes into being able to play games.

She also loves to draw ( the artist part), but until she and her husband buys a house, has to put that on hold.

I jus love that I can find someone so close to me and that we talk and have so much in common. I hope that the rest of the world can find a friend like this

This is a text widget. The Text Widget allows you to add text or HTML to your sidebar. You can use a text widget to display text, links, images, HTML, or a combination of these. Edit them in the Widget section of the Customizer.